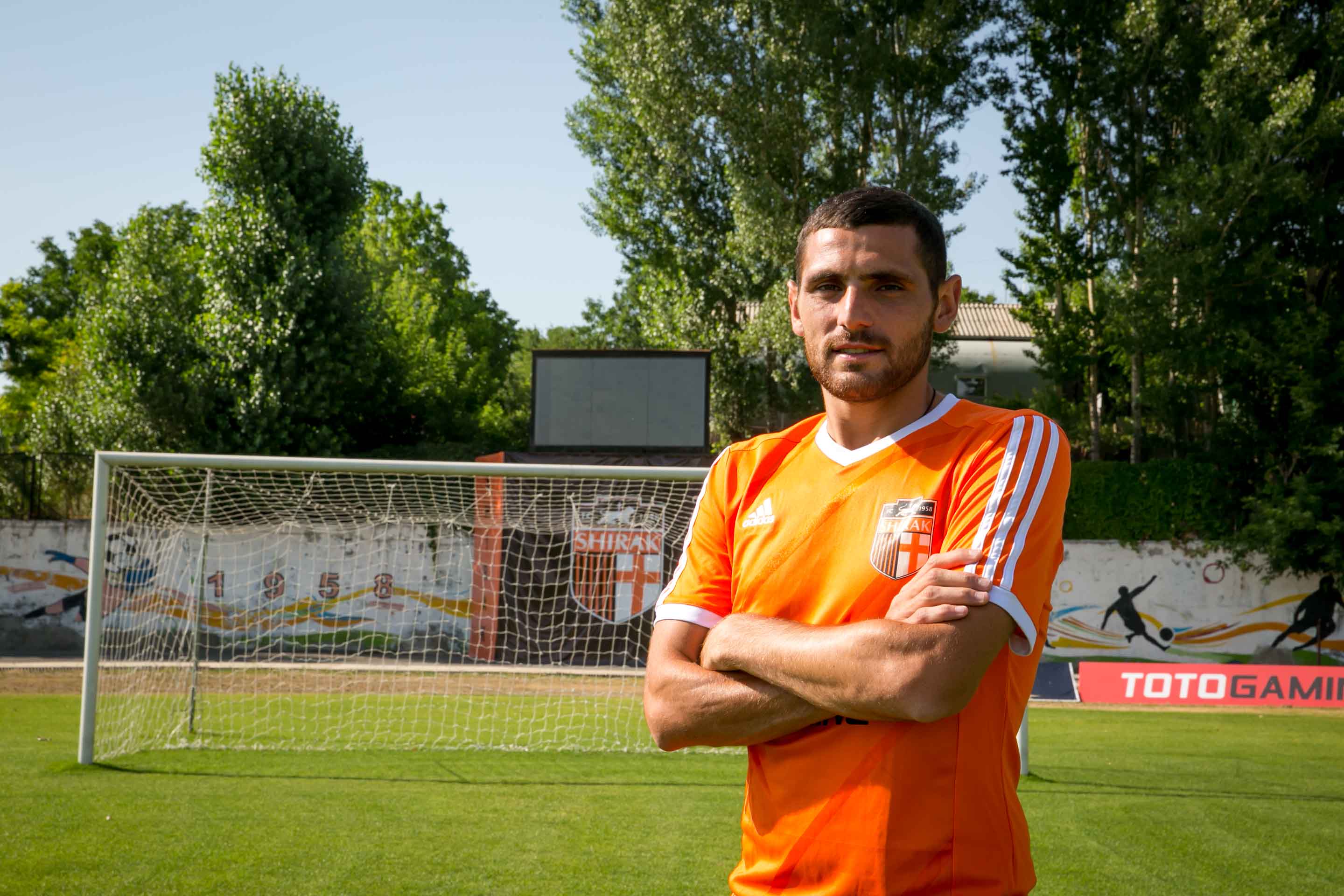 Artyom is a 26-year-old soccer player, whose childhood dream was to become one. He started playing soccer at the age of 6. In FC “Shirak” he is playing as a defender. Artyom is married and has a daughter. One of his aims is to take part in bigger championships and also be a part of the national team. His favorite FC is “Real Madrid”. Artyom has no fears. His inspirations are God and his family. In Artyom’s opinion, a real Gyumrian should be hard-working. He believes Gyumri is unique of it people and their team as well. His favorite street in Gyumri is Sayat-Nova Street. In five years he would like to be playing at a European team. He plays video games in his leisure time and also spends some time with his daughter. He recommends anyone to always go for their dreams. 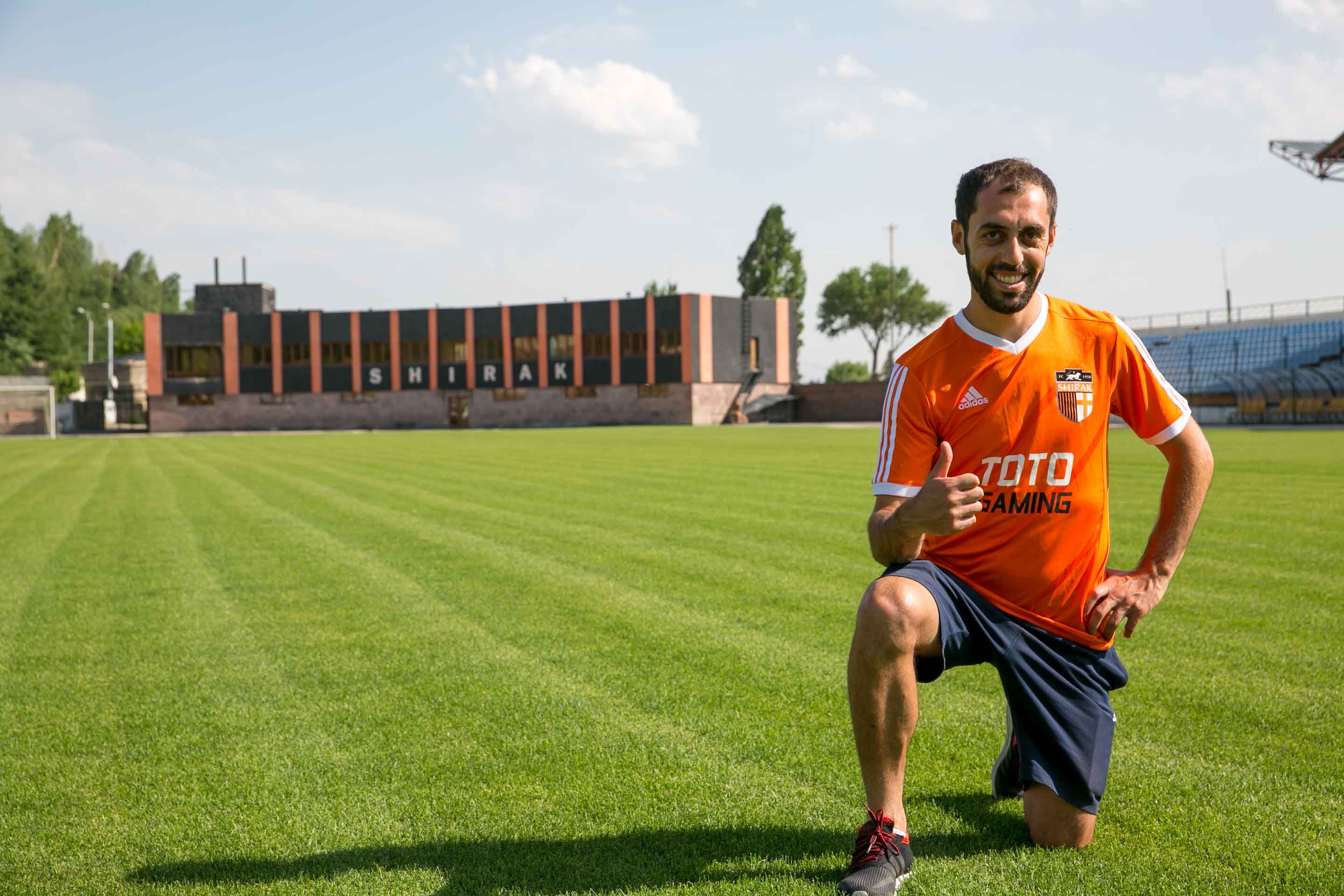 Aghvan is a 27-year-old soccer player, who only imagined himself in this sphere. However, he has chosen geography as his second profession. In FC “Shirak” he plays as a defender. He loves spending his free time playing tennis or hanging out with friends. His family consists of his parents, his two elder brothers and him. He sees himself in five years again in Gyumri. His favorite country, however, is England. Since childhood his favorite team has been “Manchester United”, and this is the team he wants to join. He loves listening to music, especially enjoys Artur Meschayn’s songs. Aghvan has no fears, but really hates reptiles. In his opinion, a real Gyumrian is hospitable and talented. He believes Gyumri is unique of its dialect. Aghvan believes, that the only drawback has is the lack of attention toward the city. His favorite place in the city is the stadium. He recommends anyone have a walk in the Kumayri Preserve as well as visit the museums. 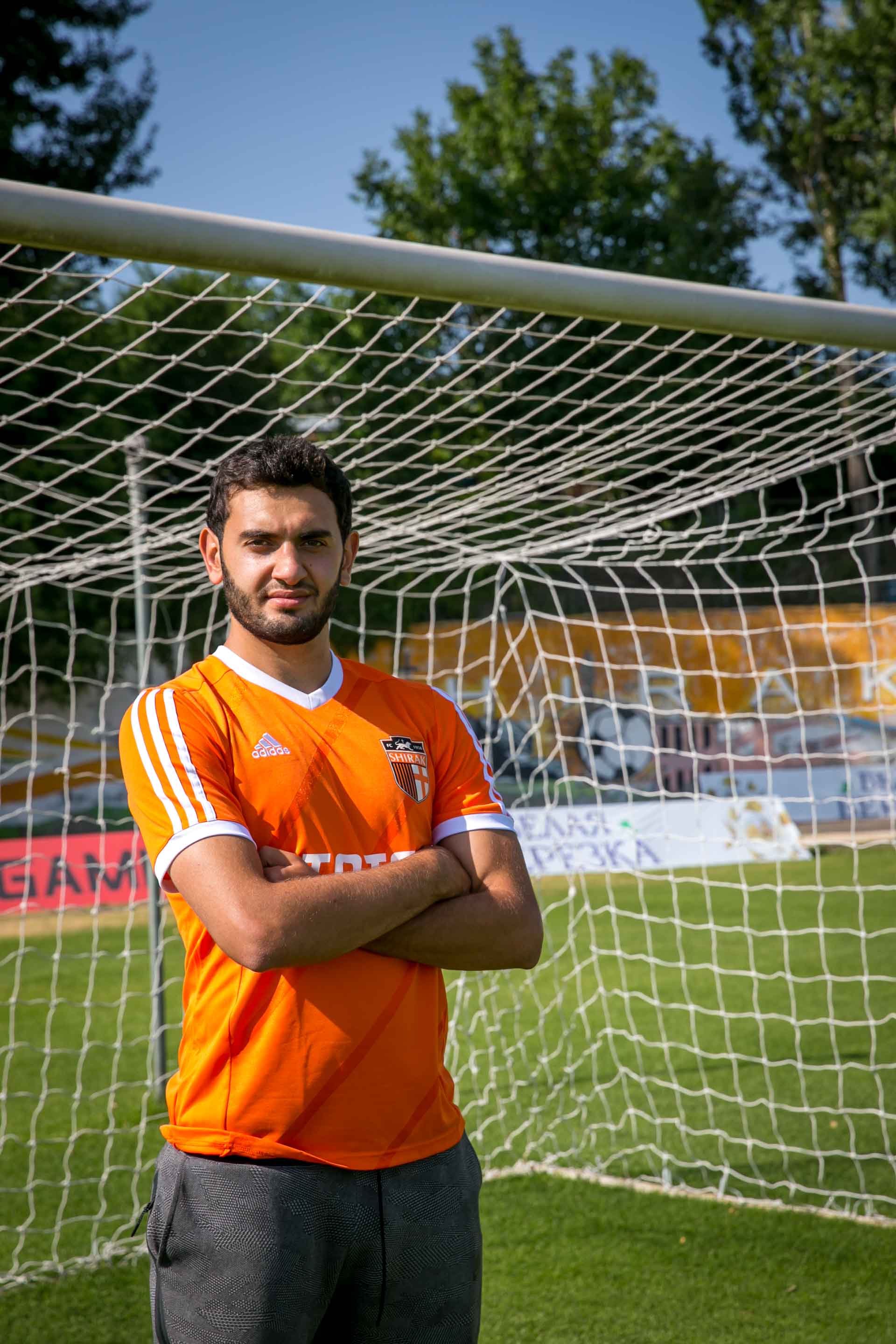 Aram is 22 and plays as a forward in FC “Shirak”. He lives with his parents and two sisters. He prefers to spend his free time with some friends. He believes, if due to work he ever lives in other countries, he will still love living in Gyumri much. His favorite team is “Real Madrid”, which is the team he would like to join. Aram has no fears. His inspiration is his family. He loves listening to music. In school his favorite classes were History and Mathematics. Aram believes, that it doesn’t matter where a person is from, he mostly believes that it is important for any person to be a human. 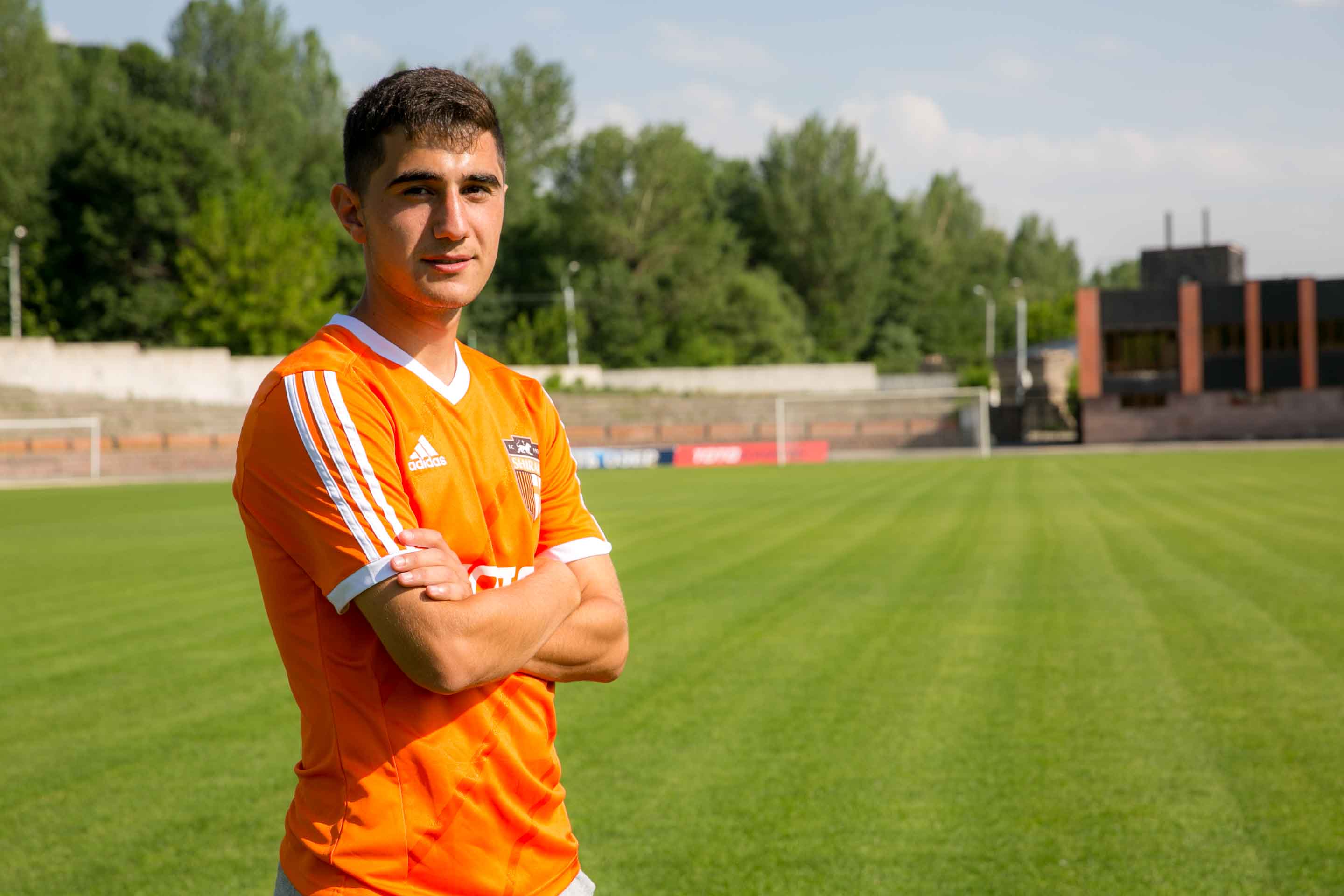 Arlen is 18 years old and is a forward at FC “Shirak”. When he was a child, he also wanted to become a soccer player. He started playing soccer at the age of six. In Armen’s opinion, soccer is a unique sport and not everybody can play it. He spends his free time with his friends. He lives with his parents and two brothers. His favorite team is FC “Barcelona”. His favorite player is Luis Suarez. He says the fans usually help the players during the game. Armen has got no fears. His favorite class at school was geography. In five years he hopes to be in Europe. If not in Gyumri, Armen would want to live in London. 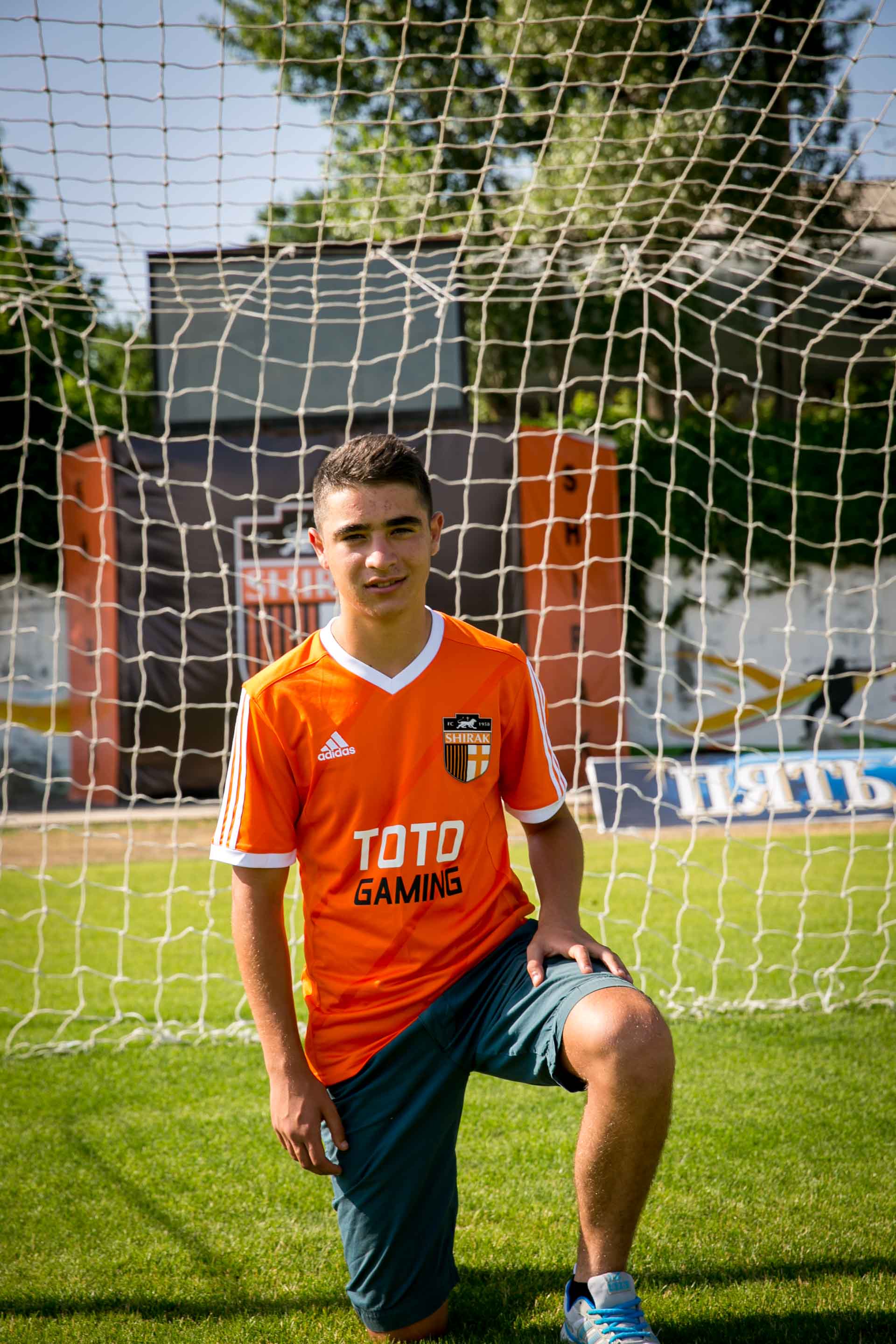 Lyova is 17 years old, but is already a forward at FC “Shirak”. He lives with his parents and grandmother. Lyova also has two sisters, who are married. Lyova has been playing soccer for 8 years. He finds his family his biggest inspiration. He has no fears. His favorite team is FC “Arsenal” and this is the team he would like to join someday. He enjoys listening to music. His favorite city is London. Lyova finds Gyumri is unique due to its antiquity. His preferred part of the city is the center. If he could, he would eliminate emigration. In five years he would like to be in Europe, due to work only though. He looks for kindness in people. Lyova says he is an honest friend. He says he loves soccer most in the world.