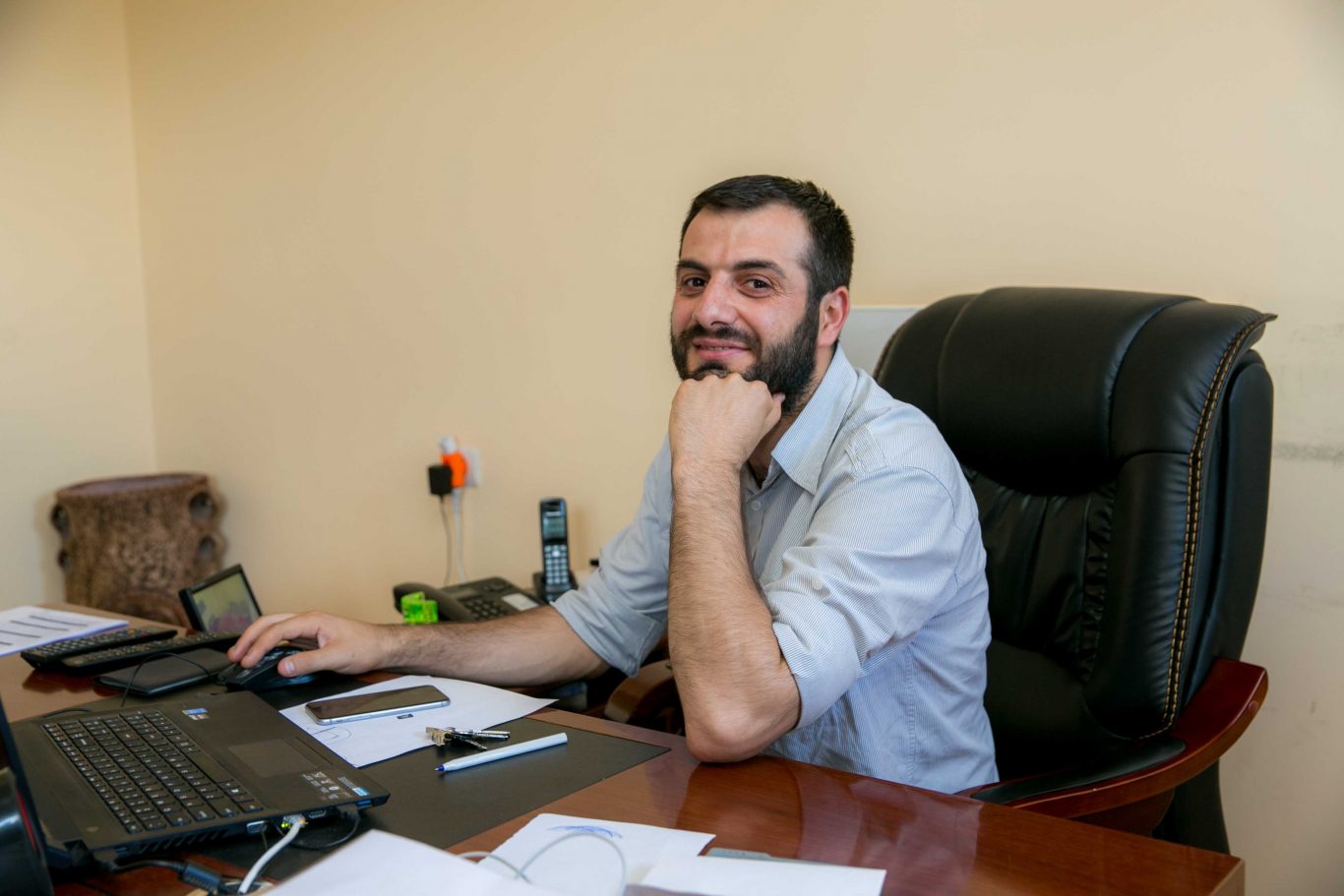 33-year-old Tigran was born in Gyumri, in a musician’s and a medical professional’s family. His family has always been connected to culture and arts, which then led him to choose Arts Coordinator as his future profession. Theatre has always been a phenomenon for Tigran since he was supposed to explore this field. Now he is the Director of the Gyumri State Dramatic Theatre. The biggest challenge about his work is to always be able to come up with new and interesting ideas, which is the main aim for the theatre. Tigran mentions that there are no borders for theatre and that it is always very much demanded in every country. Tigran tries to make no plans for the future. He lives for today and believes that tomorrow will plan itself. The biggest fear is the fear of loss. He considers love to be his biggest inspiration in life. He loves colors the most and especially the bright colors. If not in Gyumri, Tigran still sees himself in Gyumri. In Tigran’s opinion, a real Gyumrian should be humorous and ambitious. His favorite place in Gyumri is the theatre. Gyumri’s colors are what Tigran loves most about the city. In his opinion, anyone visiting Gyumri must see the Black Fortress, the Museum of the Households, as well as the Slabodka District. Tigran naturally believes anyone should visit Gyumri theatre at least once. 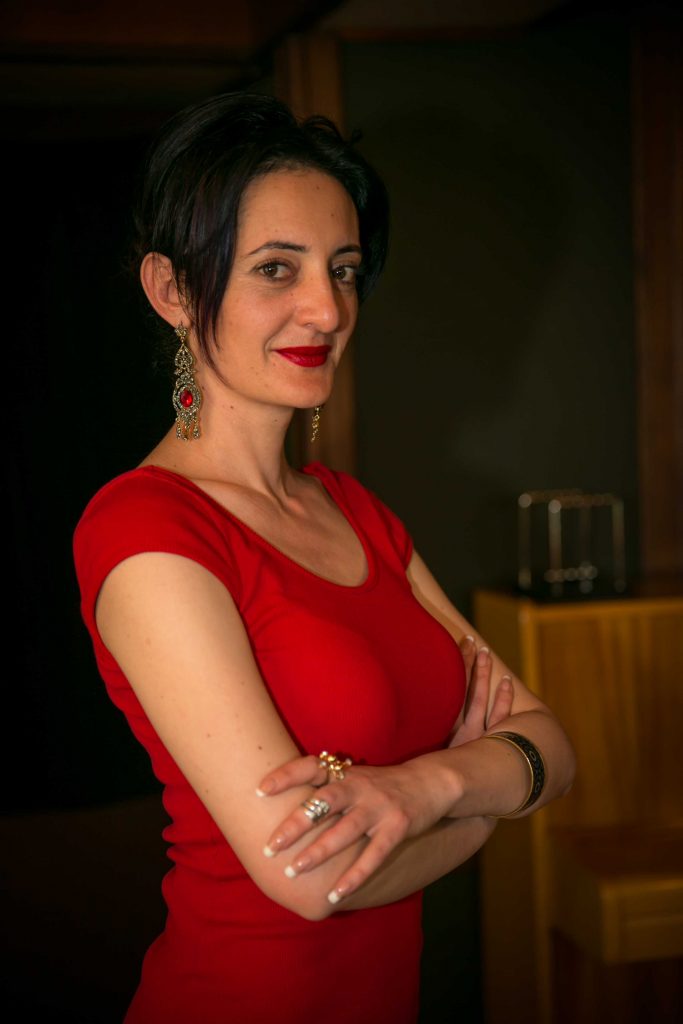 This is Gohar, 40 years old, who is an actress in Gyumri State Dramatic Theatre as well as a Lecturer at Yerevan State Institute of Theatre and Cinematography. Though she is from Yerevan, she has been living and working in Gyumri since 2001. During her college years she had been working in the Gabriel Sundukyan Theatre. There was a time when Mrs. Gohar decided to move to Nagorno Karabakh, but her professors led her to Gyumri, the home of arts, where the young artist was to start her career. She has no favorite role, as she considers the creation of every new role a process of giving birth to a new child and loves all of her roles. Her childhood dream was also to become an actress, but the main inspiration for her were the teleplays. She believes, however, people don’t become actors, they are born actors. The symbol of a family for Ms. Gohar is a boiling kettle, which makes her feel home. No one in Gohar’s family is related to theatre, only her grandfather’s sister, Khanoum, has been an actress, about which Ms. Gohar has just learnt. Gohar’s husband is an engineer and they have a son. Ms. Gohar believes, that the theatre does not like any temporary lover, but it needs true and permanent loves. A big achievement in her life Gohar considers the life itself. If she could change anything about life is that she would eliminate all the illnesses as well as foolishness. If not in Gyumri, Ms. Gohar would still live in Gyumri, because she thinks there is the God and the space in Gyumri. 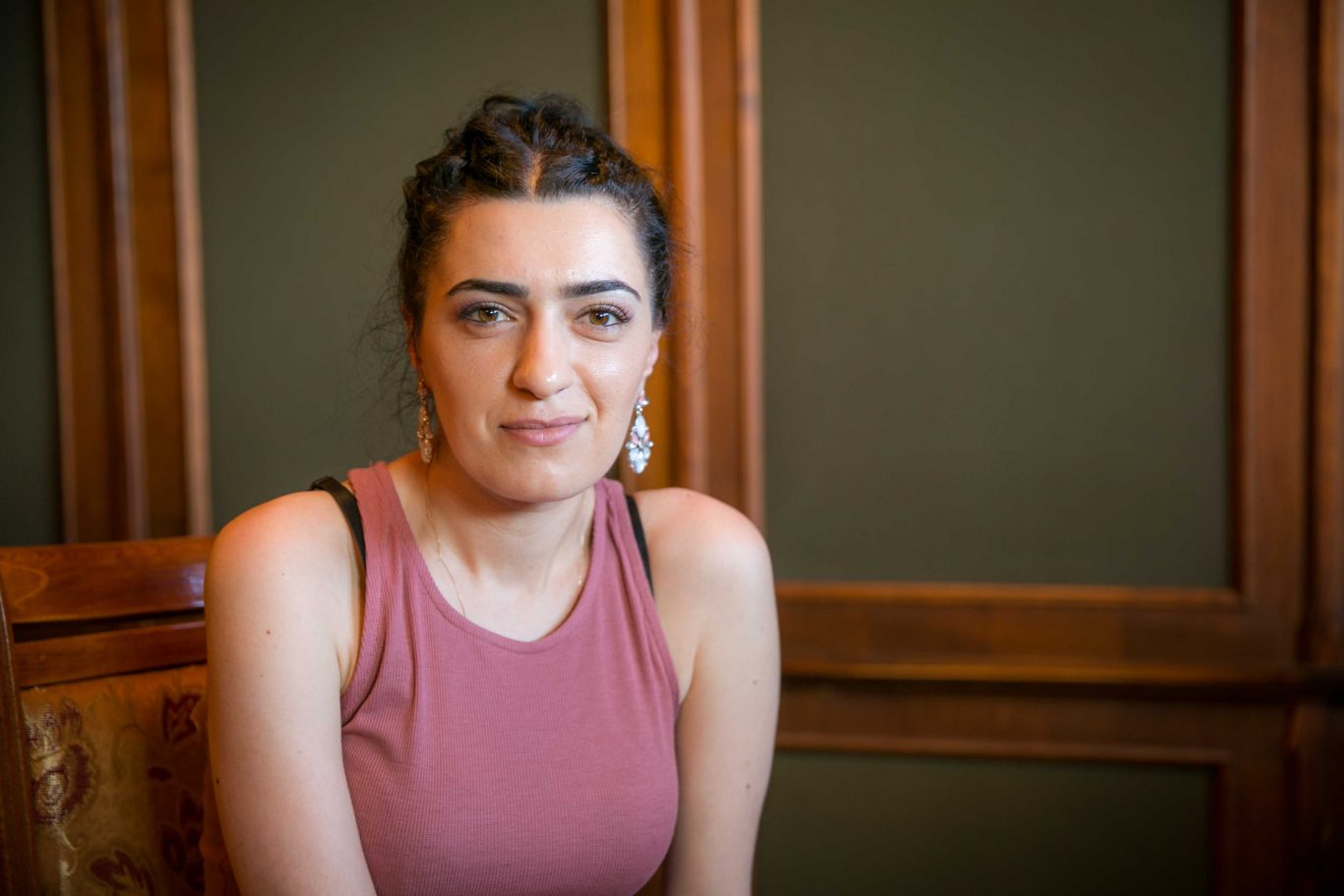 Lilit is 33 years old and works as the Director’s Assistant in the Gyumri State Dramatic Theatre. Although by profession Lilit is a stage director, she totally enjoys her current job and believes that is what she has been looking for. When she was a kid, she dreamt of becoming a singer or an actress, and somehow her dream came true as she got to take part in several plays while still in college. She has a small family: her parents, her sister and her cat. Her inspirations are the positive people and the nice weather. Her current job and her friends are her biggest achievements so far. In five years Lilit would like to see herself in Yerevan in order to gain some more experience, but she believes if someone looks for something, he or she can find it anywhere. Italy and Spain are her favorite countries in Europe. Lilit believes, that a real Gyumrian should be humorous. She loves the Kumayri Preserve and suggests anyone visiting Gyumri see it. In her opinion, others will get antiquity from Gyumri. She would like to see Gyumri as a cleaner place, and the world as a peaceful place to live in. In life she recommends anyone not to lose their faith ever. 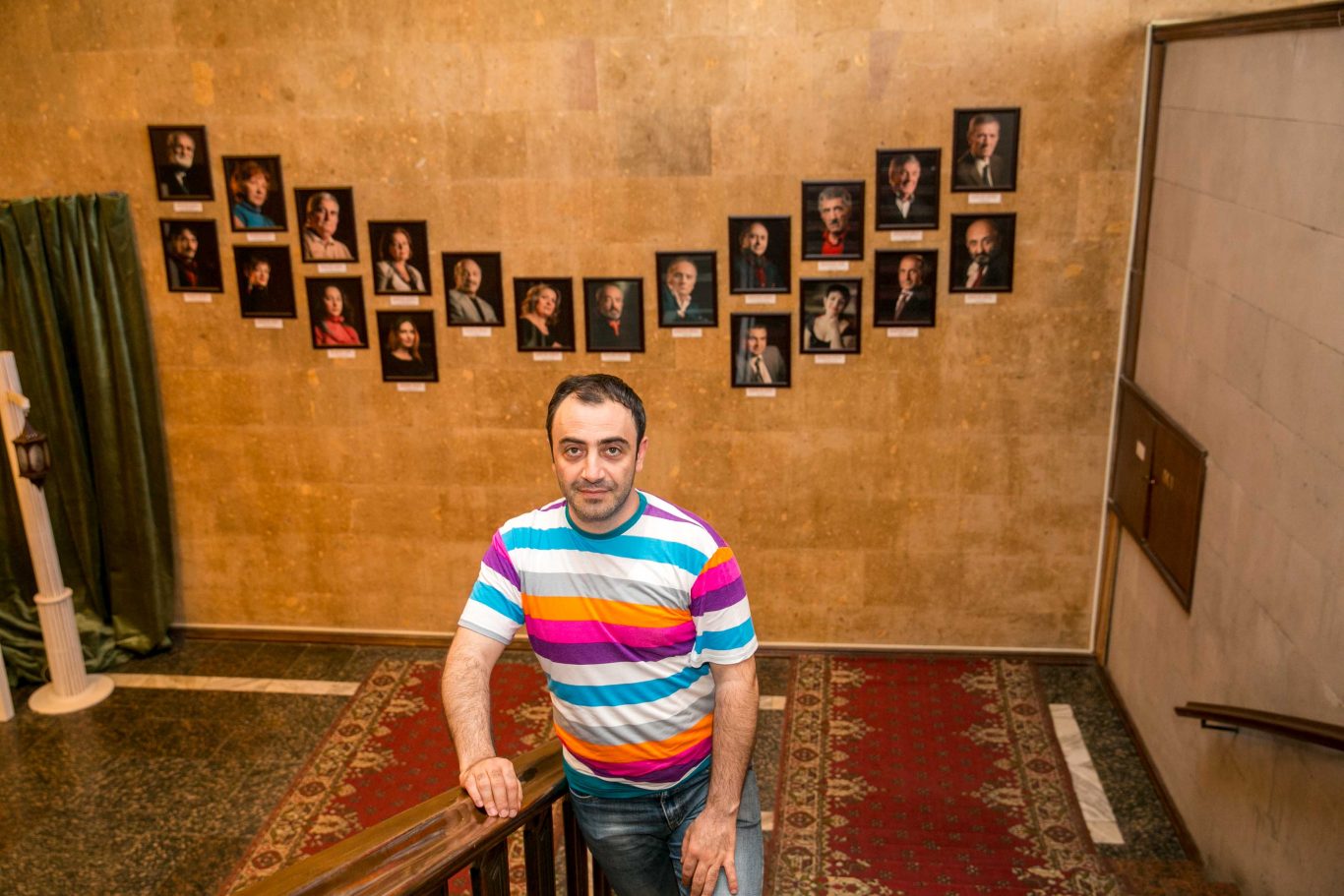 Lyudvig is the main Stage Director of Gyumri State Dramatic Theatre. The 33-year-old Stage Director is married and has two daughters. In the 10th grade Lyudvig decided his future profession to be in theatre, though at first, his love towards the theatre seemed more of a hobby. In 5 years he still wants to be in Gyumri, in the Gyumri Theatre and again with his family. His biggest fear is height. His biggest inspiration in life is his faith. One of his aims is to make the theatre available outside of Armenian borders, as he believes the theatre of Gyumri is a presentable theatre to the world. If he had a chance he would eliminate all the wars and hatred. Despite diverse nationalities and religions, Lyudvig would still want to see the whole world totally peaceful and without any borders.
In Lyudvig’s opinion, a real Gyumrian should be proud, hard working, ambitious, humorous as well as full of faith. However, the most unique characteristic about Gyumri locals is their laughter out of tears. If not in Gyumri, he would still be in Gyumri, though he is fond of short travels.
The Stage Director loves the life he has chose. His biggest achievement in his career is his current job, in family- his daughters, in life- him being Armenian. 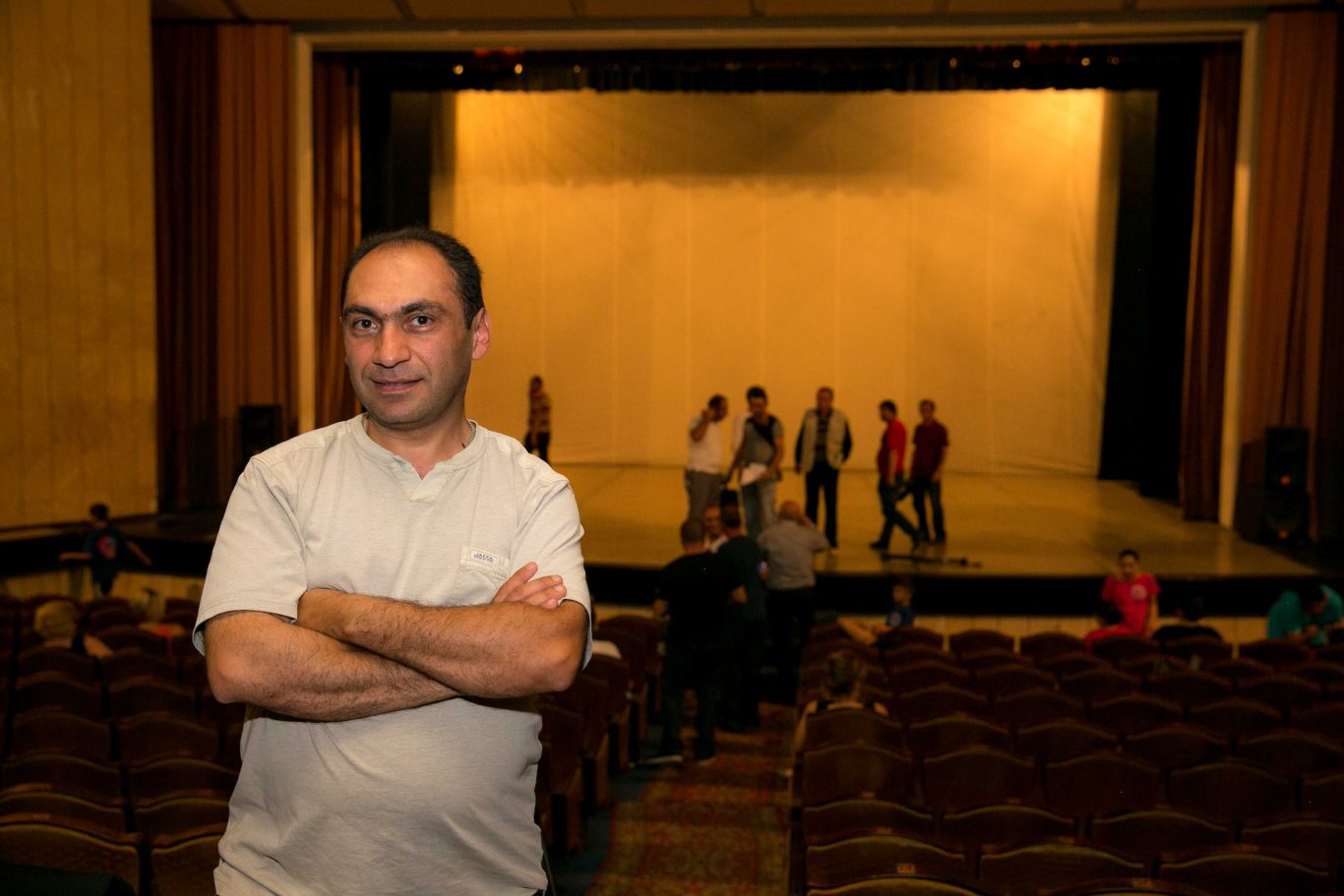 Tigran, who is 40 years old, is the Deputy Director of Management at the Gyumri State Dramatic Theatre, though by profession he is a psychologist. Like all the kids, he also dreamt of becoming a doctor in his childhood. After serving in the army, he started studying and working at the same time. Tigran worked in the “TSAYG” regional TV station in Gyumri for 15 years. Though he has never worked as a psychologist, he believes his profession helped him a lot in his future working spheres as well as in communications. He has always been somehow connected to the Gyumri theatre, but only started to work there in 2017. Tigran is married and is living with his parents, wife and two sons. His biggest fear is the current situation at Armenian borders. The biggest inspiration he considers to be any kind of success. His two sons are the biggest achievement in his life. In five years he still sees himself in Armenia, and if not in Gyumri, Tigran answers: “Still in Gyumri”. In his opinion, a real Gyumrian should be ambitious and a promise keeper. Sayat-Nova and Rizhkov streets and the Kumayri Preserve are Tigran’s favorite places in Gyumri. He believes Gyumri is a city, which has got history, and if someone wants to explore Gyumri, has to walk from the dirtiest street to the most clean squares. He also remembers the old Gyumri, where he would have long walks with his family in the night. Tigran believes that Armenia’s current issue is the emigration and this is what he would change if he had a chance. 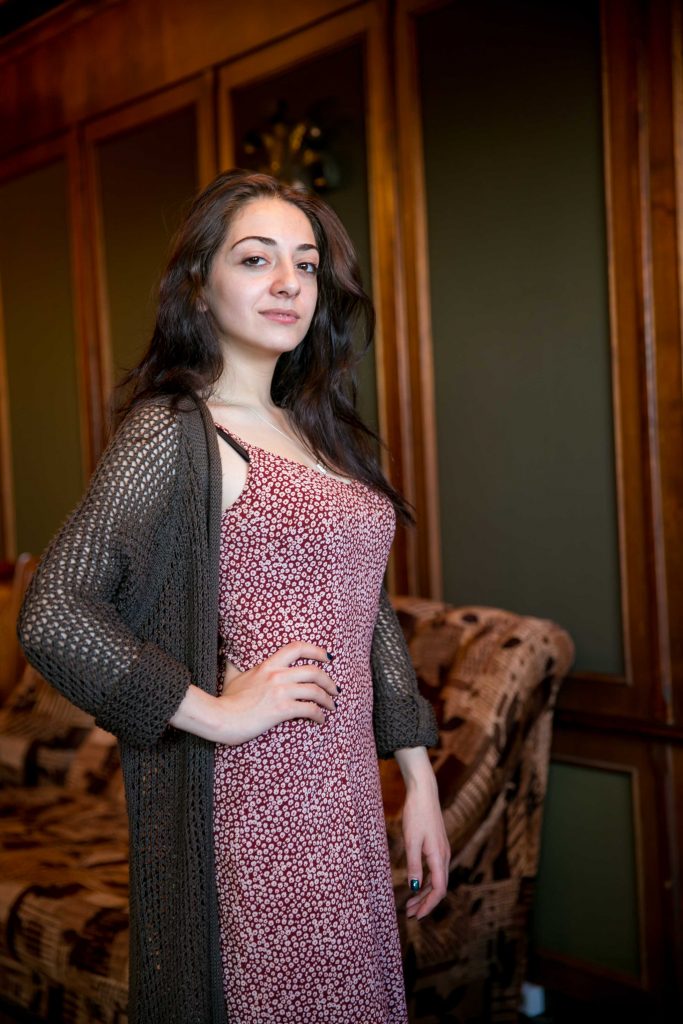 Jemma is 22 years-old and has recently moved from Kapan to Gyumri. Though her parents are dancers, she also dreamt of becoming one when little, but then she immediately chose the profession of the actress. She has got a brother, who also continues their parents’ profession. In 5 years Jemma sees herself again on the stage, and she does not dream of bigger ones as she considers Gyumri theatre a big stage for her. The role of Catherine Petrovna is one of her favorites, but she says even the smallest roles can become way too lovely for an actress. Her motivation are her family and friends, while she considers her inspiration to be the nature and the space. Her biggest fear is loneliness. She has lived in Kapan and in Yerevan for years, and though she has just moved to Gyumri, she believes this is a very suitable place to live in. Unlike others, Jemma does not dream of visiting European countries. She prefers to see the Caucasian Tbilisi for once. She loves the old streets in Gyumri and she believes there are even a couple streets that she really respects and wants to bow in front of them. She especially likes the Slabodka District in Gyumri, where she believes is the perfect place to get to know the whole city. The only thing she would change about Gyumri is the timing, because she feels sad that the city falls asleep way too early. In Jemma’s opinion, a real Gyumrian should be someone who has some piece of art in him. The positive young actress claims to anyone: “There are wings out there, you only need to use them and fly”.